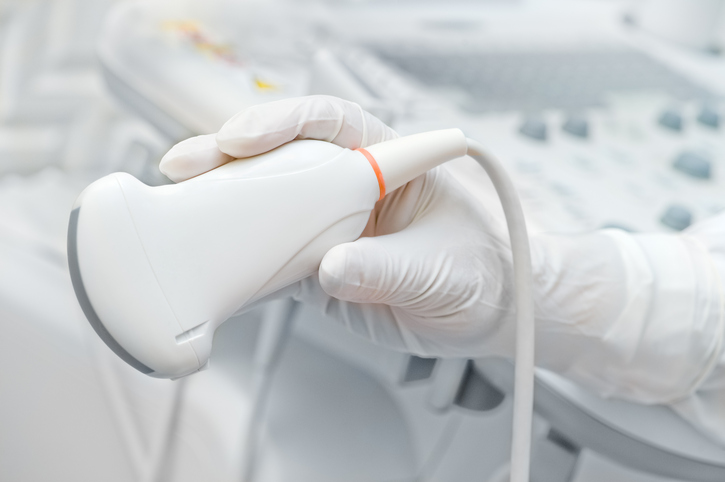 Real time 2D transperineal ultrasound imaging is emerging as an exciting new technique for both pelvic floor muscle assessment and training.  Far superior to the transabdominal approach, it’s a valuable tool to use with patients before or after radical prostatectomy, prolapse, pelvic pain, obstructed defecation, or voiding dysfunction.

Evolution Of Ultrasound Imaging For Physiotherapists

The use of real time 2D ultrasound imaging by physiotherapists has rapidly increased over the past few decades.  It gained popularity for assessing and retraining the core abdominal muscles in patients with chronic low back pain, and is now used extensively across the profession to assess the function of many different muscle groups.

An exciting use of real time ultrasound imaging is for assessment of the pelvic floor muscles.  This can be done via a transabdominal or transperineal approach.

The ultrasound transducer is placed on the perineum, and a midline view of the pelvis is obtained.  It allows simultaneous investigation of all the voluntary muscles of the pelvic floor, has proven reliability and validity, and is a powerful form of visual biofeedback1-3.

One limitation of ultrasound is that it doesn’t assess resting muscle tone.  However, a skilled operator will be able to identify the poor motor control patterns associated with pelvic floor muscle overactivity, and can proceed to an internal exam for further investigation.

Transperineal Ultrasound In The Clinic

Transperineal ultrasound has only been used by physiotherapists in a clinical setting over the past few years.  This is, in most part, due to the work of Professor Paul Hodges and Dr Ryan Stafford, research gurus at the University of Queensland.  They have recently turned their attention to understanding the male pelvic floor and continence mechanism, and have been using transperineal ultrasound as their main assessment technique.

Historically, the male pelvic floor has been assessed via digital rectal exam. This is an appropriate way to assess levator ani function, however doesn’t give us information on the anterior urinary sphincter complex.  The major advantage of the transperineal ultrasound image is that it allows simultaneous investigation of all the striated muscles contributing to continence.  This is especially helpful when assessing men before or after radical prostatectomy.

Fig 2: Midsagittal view of the male pelvic floor, with ultrasound transducer on the perineum1

Transperineal ultrasound has many useful applications, including:

Transperineal ultrasound imaging is a really exciting new tool in our toolkit.  It has improved our clinical practice, and will lead to improved patient outcomes especially for men undergoing radical prostatectomy.

Read some of our recent articles and education & health promotion
material on our News page.